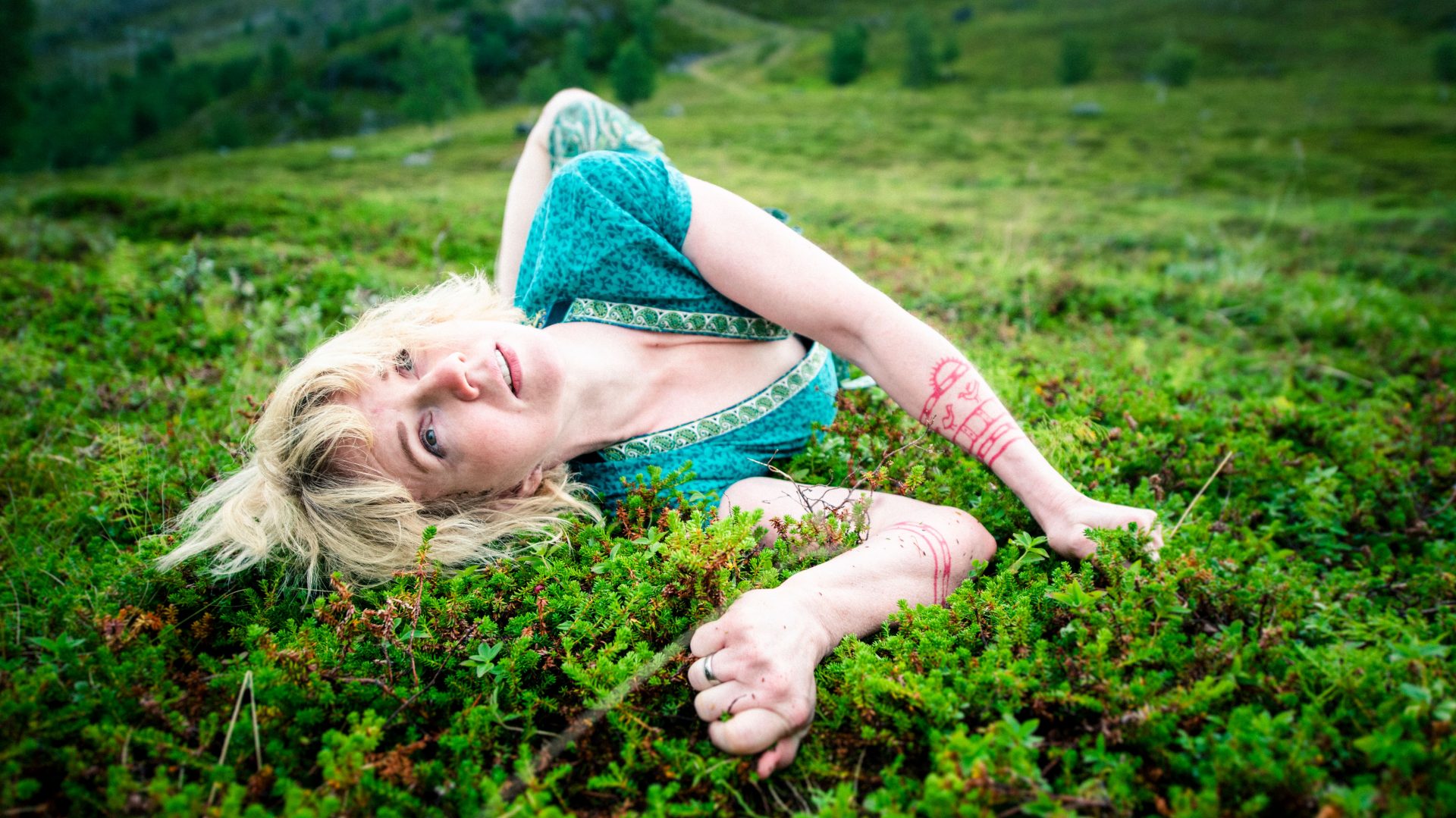 A few weeks ago I moved from the southern part of Norway where I´ve lived and run a small ecological farm for the last four years. I moved home. Home is for me the city Trondheim in the middle of Norway, and the small place Trolla which is just outside of the city centre between the fjord and the forest. I spent large parts of my childhood here, and all my four kids have been born here. I actually thought I wasn´t the kind of person that got too attached to places or people, and that I could spend my life travelling and living anywhere. I had to turn 41 before I realized otherwise. Since january I´ve been seriously trying to get into shape, to loose some weight, become stronger and improve my dancing and tae kwon do-skills. This means that I eat healthy, do strength training every day and spend a lot of time walking or running in the woods, in addition to dancing and martial arts. Tonight I decided to go for a fast walk/slow run in the woods to relax my mind which is overloaded with my upcoming performance at Stamsund Theatre Festival. And also to make my dog happy. Todays walk turned into a walk along memory line. I have so many memories from these woods, some sad, some happy, some fun. I´ll show you. This is where I ran.   When I was a kid my mother once took me and my sister up to this little lake in the middle of the night to go ice-skating in the moonlight. It had been cold for a long time but there were no snow, so it was perfect for ice-skating. But because there hadn´t been any snow the ice was dark as the black water and very scary to skate on. Today it was sunny and beautiful.   I haven´t walked this exact path for more than 20 years. Last time I was here I came here with my granddad. He died 20 years ago. I´ve always wondered later where I could find this place, but today I just ran straight onto it. My granddad loved this forest and spent most of his life in it. I remember just days before my granddad died he told me that the last time he was in the forest there were so many little birds around. He felt that the birds spoke to him and told him to come and join them. I assume he did. This is the place he took me to when I was a kid.   This is where I always go when I walk in these woods. Its just above Trolla and I think everyone in Trondheim comes here once and a while. Its a wonderful place to have a bath or go ice-skating.   Once I was skiing with my mom and sister, and when we came past this spot, there where a lot of policemen around carrying something. My mom talked to them and told us they had found a dead moose under the ice. We had been ice-scating on the lake the day before. Later my mom told me that there had been someone there iceskating just after us, and they had discovered a hand beneath the ice. The police had pulled a dead man out of the water beneath the ice. Just here:   Once I was a ghost, restlessly wandering theese woods crying. With the help of a bunch of child warriors I got married to my hero on this little hill, finding forever peace. The sadness of this marriage was that the man playing my groom was my forever best friend. We spent years having fun together, going out, watching football (I hate football, but with him I could watch), drinking Whiskey, larping (live role playing – google it) and just being together. He comforted me when I was heart-broken, worried about me when I was dating, took care about me when I needed it. He teached me to pay it forward. After several years we tried out a real relationship. It lasted only a couple of months. I probably misbehaved badly and I broke his heart. This marriage was the last time we talked. I still miss him. I still love him too. Though its probably been ten years.   I used to take my daughters to this lake, when I was a single mom and the three of us was an unbrakeable unity. We often came here to barbecue or have a bath in the lake. I can never forgive myself for leaving town and breaking us up. Once I was here with my theatre-group. We were very drunk, one so badly that his tongue got swelled and numb and was just hanging out. We almost laughed ourself to death. Then we had a naked bath in the lake. Something happened to one of the actors skin so all the veins became visible under his skin. Almost freaked us all out. We decided to take a picture where we all lay floating in the lake looking dead. I wonder if those pictures still exist.   Final destination. I only ran 8 km, but it was memories from a lifetime. Thats what is good about being older. I have lived so much. I always chose to live my life intensely. You rarely regret what you do. You regret what you don´t do.  This has been my philosophy. I might have to reconsider it. I belive my mother´s and my grandmother´s house are both in this picture. My mothers on the next headlands. Gathering my family here. I hardly have any money, I have no farm any more, no land of my own, no horses, no car. I own nothing. But I have art, I live art, and I have this. This is home.

But then suddenly I did…   Not because I´m the kind of person that enjoys pain. Not because I think piercings are so cool. This piercing is on my chest, its 3,5 cm and I´m going to hang the sami brooch there. In my skin. In my next performance. And I´m not hard enough to put the needle through my own skin during the performance, so I had to have a piercing artist do it for me. I did it because I don´t feel sami enough. I don´t feel Norwegian enough either. I don´t feel that I belong. This sami identity that I suddenly got, I feel I stole it. Some people mean that I should let it be. And I wish I could, just as much as I wish that I was still an engineer. Calm and steady, happy in my well paid job. Unfortunately I´m not. I´m a confused artist struggling for life in a hard and competitive world where you’re always poor (in a Norwegian manner) and never good enough.  I wish the question of identity were simpler. That I could know that I was valuable only by existing. Unfortunately I know I´m not. I´m sami whether I want it or not. I´m also a Norwegian, from a good family of the people who ruined the lives of my other family. That is what assimilation is about. Or maby theire all related when you go back far enough. The assimilation of my ancestors is a pain that I will always carry. I´m an artist whether I want it or not. Whether someone likes my art or not. It is whom I am, what makes my heart beat. Whether I like it or not. Sometimes I actually do like it, but mostly I hate it. More is coming. Because it has to. It is who I am. Maybe it´s not who I was, but what I am about to become…

Today I was on the Coastal First Nations Festival as a visitor. To me this was a lifechanging experience. The native american culture have always been a visible and proud one. Even when it was still under extreme pressure and destruction. All my childhood I put my pride in walking silently in the woods so no-one could hear. I also transferred that to walking silent in the stairs or anywhere else, happy when I managed to sneak upon my unknowing family members. I loved being in the forest, and for all the world I wished that I could be a black-haired, brown-skinned princess as Pocahonthas. Not the readhead, freckled and pale as snow person that i have always been. To experience the solid strength, the familiar ties, and the secure traditions of the native canadians on this festival has changed me forever. Until hours ago I felt that my culture was lost, I´ve been afraid that I was not sami enough, not pretty enough, not young enough, not clever enough, not skilled enough… just not enough. But Margaret Grenier, artistic director of the Dancers of Damelahamid and produser of the CFNDF said something that has changed my life for ever today. I can´t repeat every word correctly, but the meaning went something like this: «Our people have suffered through so many things in the past. But there is no need to fear. Our ancestors are with us always, no matter what. They will follow us and make sure that we stay on our path and continue evolving as we are ment to be. There is no need to worry.» Thank you Margaret. I´ll keep your words in my mind and know that my ancestors are with me. What I create I´m ment to create. I´ll learn what I need to learn, in time. I don´t need to fear or blame myself. I´m safe. Thank you for sharing of your strength and wisdom. Now I feel so confident about tomorrows performance. Despite of rubbery stage floors and lack of hairpins. Thank you. http://www.damelahamid.ca/coastal-dance-festival

It´s still not officially settled, but today I got confirmed that I´m invited to the Coastal First Nations Dance Festival in March 2018. I´m so exited about this. Last year I was invited to the WIPCE (World Indegionous People Conference on Education) in Canada, but they did not cover travel costs, and I didn´t have time to get the project properly funded. This time I think this will become reality. I´m so grateful for all the opportunities that life sends off along my path.

Today it was finally confirmed that we have a new dancer in our performance Heritage, for the performance in Hammerfest! I´m looking so much forward to work with the wonderful dancer Tonje Sannes!

Or at least to Stormen Kulturhus in Bodø where Envegsbillett (One-way-ticket) will be performed on the upcoming monday 11´th of December. The next two days I will be rehersing at Aladdin, thanks to Scenekunst Sør who´s providing localities to a overcoming price for local artists.

We had an incredible journey in Bangladesh with «Arv» (Heritage) i November 2017. The tour were sponsored by UD/Norsk Danse og Teatersentrum and Daiddafoanda. We are immensely grateful for their help to realise this project. Having the opportunity to tell my grandmothers story and make the coastal Sami people alive by promoting their history throughout the world is of grate importance to me.